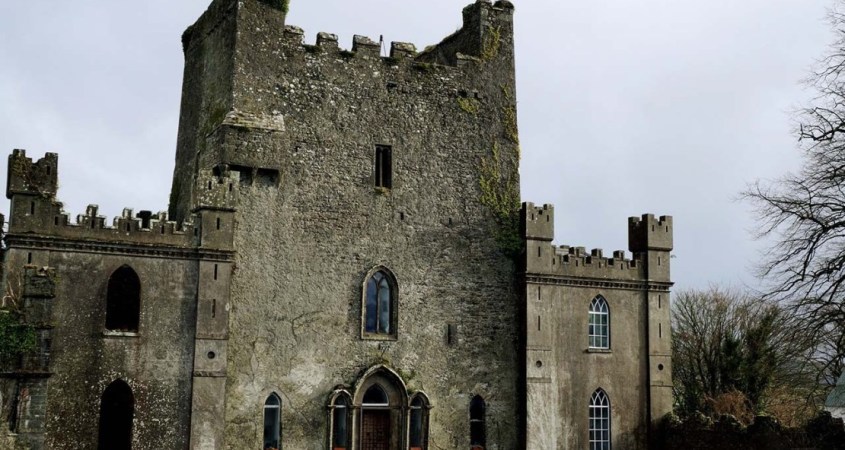 Leap Castle has a very fascinating history attached to it. The castle was built in the early 1500’s by the O’Bannon clan and (of course) has a bloody past attached to it. Local legend says the place is extremely haunted.

The Bloody Chapel is infamous for its paranormal activity, many ghost hunters and investigators alike have darkened the doorstep of Leap Castle, with gear in hand, ready to experience all it has to offer.

My personal experience here is one I will never forget. I’ve been to Leap Castle four times previously, once for a day trip, twice for a overnight investigation and lastly for the filming of a documented investigation for my YouTube channel, the latter was the most chilling.

Made famous on shows like Most Haunted and Ghost adventures the castle has an atmosphere like no other. The feeling of being watched is very evident throughout the castle and its’ grounds. On one occasion, when I decided to go to Leap with a local paranormal investigation team, (I was so excited to join them as it was my birthday and as a gift to myself I decided to go), little did I know I would not make it through the night, not from fear, but from an overwhelming feeling of being sick to my stomach and a feeling as if I had been poisoned. One of the castle’s ghost stories is a tale of a large group of people being poisoned in the Bloody Chapel and the ghosts of these unfortunate souls are said to roam aimlessly throughout the castle. I wonder… Did I pick up on their pain or how they felt after been poisoned?

I remember overheating and my body shutting down and I remember vomiting and that nothing would ease my discomfort. To my embarrassment I had to tell the paranormal investigation team I was with that I had to leave, I felt incredibly disappointed that I left and was not able to do what I love to do. This upset me greatly, but I had to get out of that bloody castle. I still wonder to this day if the spirit of an unfortunate soul came in direct contact with me the minute I stepped foot in the castle.

This did not stop me from returning.

The team graciously offered me a chance to return on their investigation, and me being me, I jumped at the chance. I returned and didn’t have the same feelings as the last time I aided their investigation and remained in the castle until about 5 AM that night, but unfortunately a girl who attended the paranormal investigation became ill with the same issues I had.

I was lucky, maybe the spirits were giving me a break this time.

Activity wise Leap Castle (in my opinion) is all about emotion. People are very affected by its’ energy and they seem to become ill very quickly after entering, or worse, aggressive. While up in the Bloody Chapel at 3 AM in the morning on my second visit, a friend of mine and myself witnessed a very clear dark figure standing behind another team member with us at the time, but it rapidly disappeared as we announced its presence, at that exact moment I heard a woman screaming in the distance.

Upon my return during the daytime to film a video for my YouTube channel, the pressure was on. I had the most haunted castle in Europe all to myself for as long as I wanted and the problem was, I was alone, filming alone, in a haunted castle with no backup in sight, so inevitably fear took over. I climbed the spiral staircase to the second floor, I was fine there, nervous but calm as anyone could be alone in Leap Castle. It was when I climbed up to the most haunted area of the castle that my senses were bombarded with fear and the feeling of being watched. I got myself inside the Bloody Chapel, three floors up, no easy escape, 1… 2… 3… deep breaths OK it’s time to call out and get the spirit box going, but to my horror, I turned around and the door I just came through was moving seemly all on its’ own. A heavy wooden door I might add. All of a sudden, “BANG!”, in front of my eyes the door slammed shut.

Fear rushed through my body, I abandoned all thoughts of a spiritbox session, I said to myself “Not today!” and then bolted down the spiral staircase. I was so disappointed in myself, but the fear caused by this place was like no other. I quickly thanked the owner for allowing me to film and made a hasty exist out of Leap Castle never to return (As of yet).

A bloody history, a fantastic castle, a truly haunted location. Leap castle is a “must investigate” for Paranormal Investigators. I will return with my brave boy pants next time I promise. Feeling foolish about my experiences here I urge everyone to remember my thoughts and feelings on being at this location alone. Being there alone is very different than being there with a group.

If you do visit Leap Castle, bring a friend, or the ghosts themselves will befriend you.

All donations directly support our site and its authors.